Water and Your Masonry Chimney

19 Aug Water and Your Masonry Chimney

Posted at 12:46h in Uncategorized by chimneycricket

Water and Your Masonry Chimney

The chimney is one of the most taken-for-granted parts of a home. Typically it tends to receive neither the attention 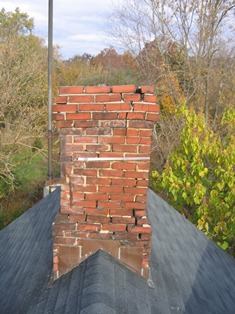 nor the concern usually accorded other household service systems. The fact that chimneys may do their job reasonably well, even when abused or neglected, contributes to this atmosphere of indifference. Chimneys are far from the passive black holes that most people assume them to be. They perform several vital functions, and their simple appearance misrepresents their complex construction and performance requirements. A chimney deteriorated by constant exposure to the weather can be a potential safety hazard. Weather-damaged lining systems, flue obstructions and loose masonry materials all present a threat to residents. Regular chimney maintenance is essential to prevent damage, deterioration and future high-cost chimney repairs.

Masonry Chimneys
A masonry chimney is constructed of a variety of masonry and metal materials, including brick, mortar, concrete, concrete block, stone, flue tile, steel and cast iron. All masonry chimneys contain combinations of, or possibly all of, these materials, most of which are adversely affected by direct contact with water or water penetration.

Water Penetration
All masonry chimney construction materials, except stone, will suffer accelerated deterioration as a result of prolonged contact with water. Masonry materials deteriorate quickly when exposed to the freeze/thaw process, in which moisture that has penetrated the materials periodically freezes and expands causing undue stress. Water in the chimney also causes rust in steel and cast iron, weakening or destroying the metal parts.

Note: While most stone is not affected by water penetration, large amounts of mortar are required to bond the stone together properly. Therefore, a stone chimney – just like a brick chimney – should be protected from the effects of water penetration.

Water penetration can cause interior and exterior damage to your home and masonry chimney including:

In addition, when water mixes with creosote in a wood burning chimney system, it will generate a highly disagreeable odor that can permeate a home. 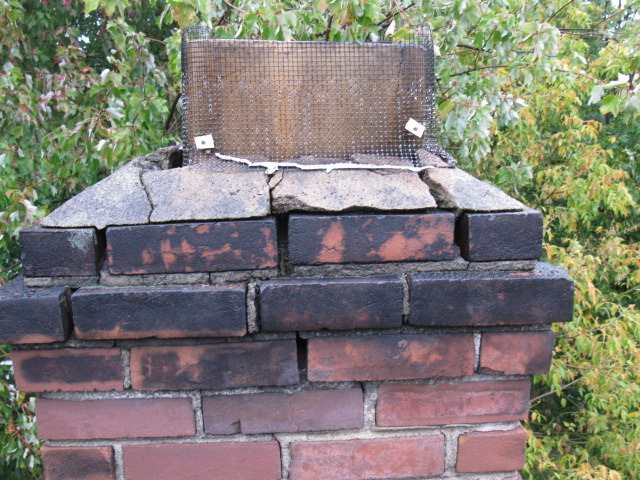 Chimney caps, also called rain covers, are probably the most inexpensive preventive measure that a homeowner can employ to prevent water penetration and damage to the chimney. Chimney caps have long been recognized as an important chimney safety and damage prevention component. Underwriters Laboratories (UL) specifies that any chimney lining system that is to be listed to their test standard must include a chimney cap.

Chimneys have one or more large openings (flues) at the top that can collect rainwater and funnel it directly to the chimney interior. A commonly-sized flue has the potential to allow large amounts of rain or snow into the chimney during just one winter when freeze/thaw cycles are common.

Chimney caps also provide other benefits. A strong, well-designed cap will prevent birds and animals from entering and nesting in the chimney. Caps also function as spark arrestors, preventing sparks from landing on the roof or other nearby combustible material.

A chimney cap should be easily removable to facilitate inspection and cleaning. For a long and effective service lifetime, a cap should be constructed of sturdy, durable and corrosion resistant material. Caps may be designed to cover a single flue, multiple flues, a large portion of the chimney or the entire chimney top. A full coverage chimney cap usually represents a larger initial investment. However, it is probably the best investment for long-term protection because of its ability to protect the entire chimney crown.

Repair or Replace a Damaged Chimney Crown
The chimney crown (also referred to as the chimney wash) is the top element of a masonry chimney. It covers and seals the top of the chimney from the flue liner to the chimney edge. The crown should provide a downward slope that will direct the water from the flue to the edge of the crown. The overhanging drip edge, by directing the run-off from the crown away from the chimney, helps prevent erosion of the brick and mortar in the chimney’s vertical surfaces.

Most masonry chimneys are built with an inadequate crown constructed from common mortar mix that is designed for years of weather abuse without cracking, chipping or deteriorating. A proper chimney crown should be constructed of a Portland cement-based mixture and cast or formed so it provides an overhang projecting beyond all sides of the chimney by a minimum of two inches. The flue liner tile should also project above the crown a minimum of two inches.

Repair Deteriorated Mortar Joints
Deteriorated mortar joints on the chimneys exterior are entry spots for water. Proper mortar joints have no gaps or missing mortar and are shaped in a way that directs water out of the joint. When mortar deteriorates from exposure to weather, it becomes much more absorbent. A common repair for deteriorated mortar joints is called repointing. In this process, the existing mortar joint is cut to an appropriate depth and the joint is repacked with new mortar. The joint is then cut to form a concave surface that will direct water out of the joint. A good repointing job, using proper materials, will give the chimney a much longer life span, and often will enhance its appearance.

Repair or Replace Flashing
Flashing is the seal between the roofing material and the chimney. Flashing prevents rainwater or snow melt from running down the chimney into living spaces where it can damage ceilings and walls and cause rot in rafters. The flashing is the expansion joint between two dissimilar materials. It is designed to allow both the roof and the chimney to expand and contract at their own rates without breaking the waterproof seal in either area.

Install a Cricket to Stop or Prevent Leaks
If the chimney is located on the low side of the roof where water run-off is directed against the chimney, the installation of a cricket will afford additional protection against water leaking into the home. A cricket is a water deflector that serves to direct rainwater away from the chimney. Crickets are recommended on chimneys more than 30-inches wide and they are especially important on steep roofs.

Waterproof Your Chimney
Most masonry materials are porous and will absorb large amounts of water. Common brick is like a sponge, absorbing water and wicking moisture to the chimney interior. Defective mortar joints or the use of improper mortar or brick can greatly increase the tendency to absorb and convey water to the interior of the masonry chimney.

Several products have been developed specifically for use as waterproofing agents on masonry chimneys. These formulas are 100% vapor permeable, which means that they allow the chimney to breathe. Therefore, water that has penetrated and the vapors produced when the chimney dries out or the water vapors produced during use are allowed to escape, while the waterproofing agent prevents water from entering from the outside. These products usually have a five- to ten-year warranty. Paint or clear sealers should never be used as a waterproofing agent because they will trap water vapors and moisture inside the chimney causing further deterioration.